In the fall of 2016 our family took a trip to Italy.  This was our “Two weeks in Italy” trip that spanned the last week of October and first week of November.  Although not considered the high season for tourism, it was toward the end of the Extraordinary Jubilee Year of Mercy for the Catholic Church, and there were a lot of people there on religious pilgrimages.  Being Catholic, we were there as pilgrims, but we did a lot of touring as well.

From the highest level, the trip broke down like this:
(This is as close to a table of contents as I get)

Putting up with me for the trip were my wife Heidi, Heidi’s mother Valerie, 13-year-old Gabrielle, 20-month-old Tommy and 10-week-old Claire.  That’s two babies in car seats and diapers.  To afford such a trip neither baby had ticketed seats on the flights; they were both lap-infants.  Did you know that you have to pay a tax on lap-infants when coming back into the US?  You do.  It was about $180 per kid, and they still didn’t have seats.

At her age, Claire didn’t require a ton of attention; she basically just ate and slept and eliminated waste.  Tommy, on the other hand, was always the wildcard.  He’s traditionally been a pretty good traveler, but this was, obviously, the oldest he’s ever been and by far the longest journey.  He did great, but, you know, there were challenges.  It seemed like the holier the site, the more rambunctious he wanted to be.

I’ll mention now that we only stayed in VRBO places in Italy – no hotels.  You get a lot more bang for your buck with VRBO.  We basically stayed in home-like settings (an apartment, a farmhouse, a villa – that kind of stuff) for a LOT less money than hotels.  But there were trade-offs, certain inconveniences we had to put up with at each one:  Things like not having enough toilet paper, tiny showers that only kind of worked, no paper towels or coffee, and the eccentricities of the proprietors.  Weird fees and regulations plagued us at each location.  Still, it’s definitely worth it to go this route.  The amenities far outweighed the annoyances.

It was an epic adventure for sure.  There was no down time.  We packed every day with incredible experiences.  There were some tears, and a little blood, but I wouldn’t change a minute of any of it.

The images I’ve included here are only a fraction of those captured on this trip.  I hope you’ll be interested enough to visit the full gallery of pictures from Italy.

Like any journey for us, the first thing we had to do was get off Vashon Island.  We loaded up the Odyssey with car seats, the stroller, and all our luggage and drove onto the ferry.  The decision to drive to the airport was a last-minute one.  We also debated taking the huge jogging stroller and car seats, but we ended up being glad we did all those things.  Valerie was travelling on non-rev airline passes and had to work out her own flights.  She left for Rome one day before us, so I think she was already there by the time we began our adventure. 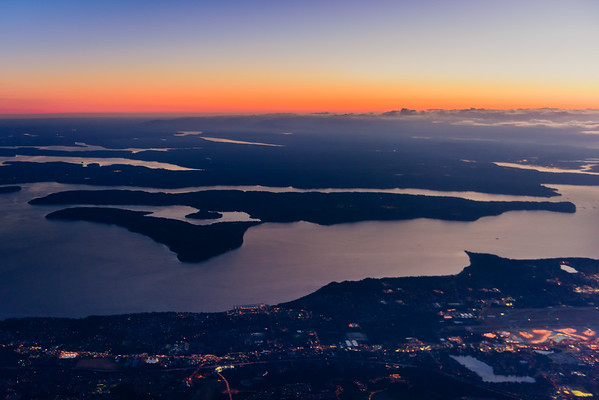 This image of Vashon Island from the air was taken on a different trip, but since I haven’t shown one photo yet on this supposedly photography-related site, I thought I’d sneak it in.

We drove to the Sea-Tac airport in Seattle and dropped everyone and everything off.  Heidi took the minivan to her work parking lot nearby, so we wouldn’t have to pay for parking, and then came back to us.  We boarded our first flight and left for Philadelphia.  This was the only segment where I got to sit in first class with Tommy.  He would be on my lap for all our flights and was an absolute trooper throughout the trip.  He slept for half of the way to Philly and was very well-behaved for the other half.  That was a 5 ½ hour flight.

Tommy looking out the window from his First Class seat. We began the trip with bags of snacks and toys for the kids and everything that might be needed to make travelling with infants go smoothly. By the time we returned, we were lucky if they were wearing pants.

The flight from Philly to Rome is, wait for it, an international one. Because of this, we had to collect all our bags in Philly and then bring them to the international terminal and re-check them. We switched carriers from Alaska Air to American Airlines, and this meant a very long walk from the D terminal to A at Philly International. Heidi stayed inside security with the babies for this, and Gabbie and I had quite an ordeal getting everything back together for the second flight. In spite of having a three hour layover, we barely made the plane to Rome. A very helpful gate agent in Philly got us an entire row (on a 757 – we had 7 seats!) to ourselves. This was an awesome perk for us and made the 7 hour flight to Rome much more bearable.

We left Seattle at 10:00 in the morning on Friday and landed in Rome at about 9:30 am on Saturday.  We were tired and stressed and totally unprepared for our first (and, thankfully, worst) nightmare of the trip – the landlady Lucia and the apartment on Nicolo III.

View from the street in front of our apartment in Rome. Some of us spent quite a bit of time down there on the street.