Cape Cod and Head of the Charles

I’ve had to travel to Boston recently for work, about once per month for a few months now.  I rarely get out to the East Coast, so this has been a treat for me.  Everything is just a little bit different and exciting, even the subway – the “T”.

It’s not really in Boston though.  I work and stay in Cambridge, across the Charles River.    As a bit of foreshadowing irony, my hotel room always has a great view of the river.  The crews are already out there rowing at dawn and are still going when I come back in the evening.

After finding out that my stepdaughter qualified for a race in the prestigious Head of the Charles Regatta (the biggest regatta in the world!), I was thrilled that the weekend would coincide with a business trip.  My wife and I decided to make a bit of a vacation out of it and traveled out on the Friday before the races.  Since Saturday was for masters only, we chose instead to spend the day on Cape Cod, an area to which I’d never before been.

Of course there were lighthouses and seascapes and salty old locals hiding dark and ancient secrets, but the primary mission was to get lobster rolls.  We had a tip for the best offerings in Chatham, but that place was closed for the season.  Another tip lead us to another closed spot, and then eventually we learned that lobster rolls were just not to be had after Columbus Day.

Disappointed but undaunted, we ended up getting some delicious lobster salad at a local market and making our own lunch out of it.  After eating, and drinking a tremendous amount of New England coffee for which we did not care, we went sightseeing in Chatham and saw some amazing houses.

I could go on for pages with all the pictures of the postcard-perfect homes on the Cape.  Perhaps there’s another post idea in there, but for now I’ll just mention that an inordinate amount of homes on the Cape have names, some of which are some’at baffling.

Eventually we drove the entire length of the Cape, and the weather couldn’t have been nicer.  It was a spectacular Fall Saturday on Cape Cod.

On to the regatta!  We had to get up very early and leave our hotel in Hyannis.  It was a bit of a drive into Boston, and we had no idea what to expect at one of the largest spectator sporting events in the world.  Parking in that area is tough on a good day.  This was not a good day for parking.  But we managed to arrive on-site before the sun was even fully up and found a decent garage where the price wasn’t totally outrageous.  We had enough time to walk the entire course up to the Eliot bridge, where the carnival atmosphere was already in full swing.

That’s the Anderson Memorial bridge pictured above.  My camera and I ended up between it and the Eliot bridge.  The river was beautiful in the early morning light.  The bridges and foliage were spectacular.  The architecture is historic, of course, and we walked past the Harvard boathouse.  Being a junior in high school, the stepdaughter wouldn’t be rowing against their crew this year. 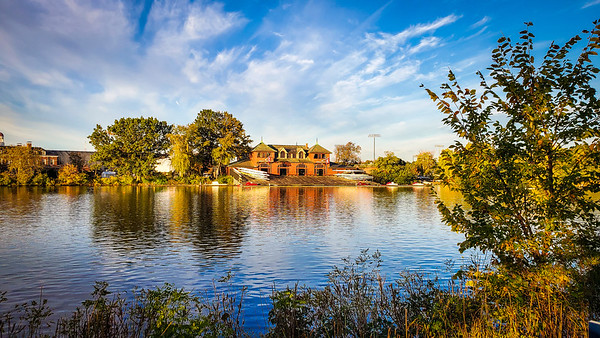 After walking the course, I found myself a great shooting position.  I have no control over the direction of the sun, and if the rowers are facing away from it, then all their faces will be in silhouette.  Normally there’s nothing I can do about that.  The Charles River, however, has so many turns in it that I could judge where the sun would be for the races with which I was concerned and position myself accordingly.

I setup on a bend where I could see the boats coming at me.  With several hundred entries, it wasn’t a given that I’d know when someone I cared about would be going by.  Unlike other regattas I’ve been to, they wore their bow numbers on the back of the bow position rower.  This made it much easier to see who was coming.

As soon as the boats passed me, I could photograph their faces in great light.  For me, this is key.  I already know what the racing shells look like; I don’t need or want a million pictures of boats.  I want to see facial expressions – passion, determination . . .

. . . yawning.  It’s a long stretch from the launch to the start, and things can get a little boring along the way.  This is my stepdaughter’s 8+ heading toward the start of the 3 mile course.

While the 8+ was navigating to the start, a quad on my stepdaughter’s team was racing by.

Eventually my stepdaughter came by.  There are 9 people in the 8+ boat.  Here, you can see the coxswain encouraging the crew to the finish.

This is just passed the 2 mile mark, so the crew would be pretty worn out by now.  And they still have about a mile to go.  Rowing is a grueling sport that takes as much mental toughness as it does physical skill and endurance.

Her boat came in 6th, out of 85 entries (in that one event!), and qualified for next year’s regatta.  I know they were hoping to medal, but that’s still a very good finish for the biggest regatta in the world.

So it was a pretty good race and trip overall.  Hopefully we’ll find a way to get back there next year.

Tumblr
This entry was posted in Crew, New England. Bookmark the permalink.