The big difference with this trip to Kaua’i was that we sprang for an ocean-facing unit.  The resort industry can be a little dodgy when it comes to descriptions of the view.  “Garden View” means you’ll be looking at the parking lot.  “Ocean View” means that, if you lean out over your deck or out a window and see a little piece of water, you have a “view” of the ocean.  We spent a little extra this time and got an actual view of the ocean.  This is what it looked like from our deck.

Since we’re on the Point at Po’ipu, this is pretty much a view to the south.  The way we were situated gave us some great sunrises each morning.

Of course no trip to Kaua’i would be complete for us if we didn’t walk down to the Grand Hyatt and, once again, discuss when or if we might ever stay there.  I’ve walked passed this place so many times that I actually have favorite rooms, and I’ve never even been inside.  Doesn’t this look relaxing and inviting?

We took another plane tour (see Soaring Over Kaua’i), and it was exactly like the previous flight.  That’s good, though.  There was a couple from New Zealand on our plane who thought it was kind of weird that we would do this same tour more than once.  We told them it was that good, that we enjoyed it that much. 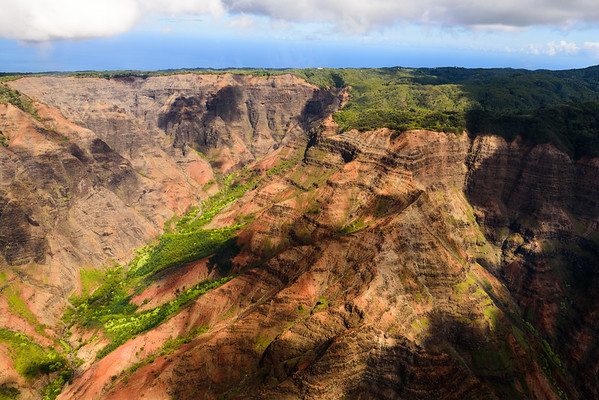 I thought Tommy might enjoy it more this time because he was a little older, but the staff told me not to expect much.  They said that the motion and sound of the plane puts toddlers right to sleep.  Nah, I thought.  This is too exciting to sleep through.

Another attraction this year was supposed to be the whales, those mythical beasts that travel down to Hawai’i for only certain months of the year.  We’d never been to Hawai’i during whale-time, so this was exciting.  And we had our legitimate ocean view.  And I had a super telephoto lens with me – 500mm of whale-viewing goodness.  It was, however, not to be.  We might have seen a tail or something one morning, but it was far out, nothing breached, and it might not have actually been a whale, or even a marine mammal.  So here’s a picture of some people fishing from a cliff, shot at 500mm, in great sunrise light.

I think I was waiting for whales (title of my next album?) when I noticed this little tableau out in the ocean.  There were some waves forming and kind of crashing out in open water.  And the light here is not Photoshop tomfoolery.  This is really what it looked like, and I thought it was kind of cool.  So, here’s another picture of not-a-whale, captured with the super telephoto lens.

But it wasn’t all not taking pictures of whales.  We did wander around Hanalei, eat at some food trucks and drive around as far as we could in both directions on the highway.  It’s just that we really like the Po’ipu area, and I couldn’t stop taking pictures right outside our room.

And that sunrise every morning.  Wow.

There was one out-of-the-ordinary thing we did on this trip.  We spent three nights in a cottage on a plantation in Waimea.  That was definitely different and very cool.  The first evening when we got there was a little rainy, though, but we wondered out anyway and eventually saw this.

I didn’t have my DSLR with me, out in the rain.  That was captured with the camera inside my phone.