The Greatest Hits of Kaua’i

Visiting Kaua’i has almost become a process of going through standard motions.  It’s like going to a favorite restaurant and always ordering the same thing.  You know there are other things on the menu, but it’s hard to not get the thing you know you like.  So a week in Kaua’i has settled into “We have to do this, and then we have to do this, and then this,” and then the trip is over.  Oh well, like the menu item, I know what I like, and I’m never disappointed.  For example . . .

We always drive to Hanalei.  Since we like to stay in the Po’ipu area, which is on the southern tip of the island, the journey to Hanalei in the north is about a far as you can drive on Kaua’i.  So the drive itself is part of the experience.  It almost sounds silly to say this, but a week in Kaua’i usually involves more than one stop at my favorite roadside lookout point – The Hanalei Wetlands.

It’s a great view of the valley right by the road.  Among other things, taro is being grown down there.  I hate to ruin the magic for anyone, but it turns out that Puff the Magic Dragon did not live in Hanalei.  Once you get up there, you will have to decide on eating at one of two fabulous food trucks.  You can get great kālua pork at Hanalei Taro & Juice Co. or opt for an incredible grilled sandwich at Trucking Delicious.  To make matters worse, the best shave ice on the island is right there too, so save room and visit Wishing Well Shave Ice.

Of course, the Hanalei Wetlands isn’t the only roadside turnout that we check out every time.  Also on the way to Hanalei is a tiny wide spot in the road, right around a sharp curve.  If you’re not ready for it, you’ll drive right past it, and only a couple cars can be stopped there at any time.  This overlooks Halalei Bay.

Down on the southern end of the island, you can find the Grand Hyatt Kaua’i.  If you can afford to stay there, more power to you.  We’ve never stayed there, but we always make a point to walk past it around sunset.  The resort is massive and sprawling.  The whole thing is beautiful, but there is one particular place where I always (always!) try to get a perfect shot.  I’ve never felt like I fully captured the scene, so it’s become a bit of a white whale for me.  A very colorful white whale.

It’s truly a riot of colors.  The flowers, the trees, the water and the buildings are almost overwhelming.  The shot above is just one part of the expansive landscape.  There’s a lot more to it.

Of course, no trip would be complete without a visit to our favorite secret beach at Papa’a Bay.  We only know about this place because of a Photo Adventure Tour we took a few years ago.  Even though we’ve been there a few times now, it’s still hard to find.  Once you succeed in getting to the nearest area to park, there is still a somewhat treacherous hike down to the water and then over the rocks.  It’s totally worth it, though.  It’s beautiful, pristine and has always been empty of any other people.

There’s the Kilauea lighthouse.  I think this is a photo-op destination for a lot of people.  It’s nice, and there’s a bird sanctuary on the cliffs nearby, but I wouldn’t say this is a must-see for us on every visit.

The Allerton Gardens, on the other hand, is a definite must-visit-every-time destination.  You might think that once you’ve gotten a tour of a garden, that would be that.  But this place never fails to deliver.  We’ve taken the standard tour as well as the sunset dinner tour where you get to go all the way down to the Allerton House on the shore.  Both are very pleasant in their own ways.  Even though it is ultimately a bunch of trees and flowers, it always seems a little different.  They have species here you wouldn’t see anywhere else, and there are so many stories of the history of the garden itself and the many movies and TV shows that have been filmed on the property.

Ke’e Beach is at the end of the highway on the north end.  You can pronounce it like “key” if you want, but I think it’s kay-ay.  It always seems to be so crowded you can’t even park, let alone relax and enjoy it.  Once we get there, the most common thing for us to do is turn around and head back the way we came.  Not too far back along the highway is a much more pleasant beach that never seems to have many people.  There’s a nice stream that runs into the ocean for smaller kiddos to play in the water.  It’s safe and calm, but you can move a couple hundred yards further on and enjoy more exciting crashing waves.

There are different ways to fly over the island with multiple helicopter and plane tours.  If you end up visiting Kaua’i more than once, I’d recommend trying each out because they afford different experiences.  As I mentioned in Souring Over Kaua’i, the radio chatter between the pilots can be almost as entertaining as the landscapes.

Speaking of souring over Kaua’i, that’s one of the best ways to view the rugged Na Pali Coast.  This is the end of the highway on the south end of the island, so you need to hike in to get anywhere.  It’s almost impossible to take in the whole scene except from the air.  You could also get on a snorkeling tour that sails past the area.  That’s also a good way to see Na Pali.  One of these days we’ll have to hike into it and see it from the inside.

And, of course, there’s Waimea Canyon, the Grand Canyon of the Pacific.  It’s certainly not as big or deep as the actual Grand Canyon, but it is not without its own charms.  It’s tropical after all.  The trick here is that there’s a long, winding drive up to the canyon that is not for the faint of heart.  Actually, driving is not super difficult, but it’s easy for someone to get carsick.  It’s worth it, though, but I do not recommend a tour for this one.  In fact, you will want to time your arrival to avoid getting there when the tour buses do.  If you arrive around lunch time, you’ll be jockeying for position with hundreds of tourists.  Don’t forget to stop along the way to check out the waterfalls.

On the way back from Waimea Canyon, you might as well stop and check out the Wailua River.  In fact, you may even want to get on one of the boat tours of the river.  That’s something I do recommend doing at least once. 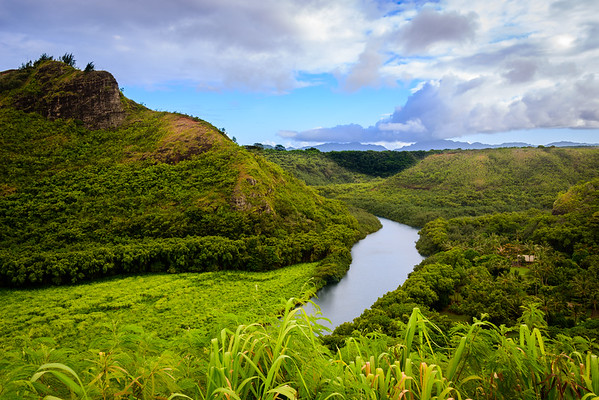 So there are a few things you can do in Kaua’i.  There’s lots of other stuff, but that should get you started.